Let us kick off the Review 30 for November with the opening chapter of something I’ve been working on; other than world domination.

Made of sticks and stones

As I said at the beginning of the week I have been working hard on a new project. This has developed out of the final exam project for the University module I completed in the last academic year; a small idea that has grown and grown, this is its beginning. 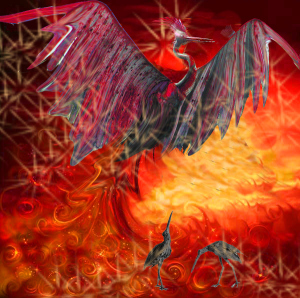 A shout from one of her clan sisters brought her back to the moment. All the clans were coming together, flying south. She had never seen so many of her own kind before, eighty at least and more shapes appeared on the horizon all the time and slowly coalesced into the distinctive shape of more lizard birds.

Most were brown like her family. Some were grey, the winter sun glinting silver off of gleaming plumage, while others still appeared to sparkle an iridescent blue, light dripping on to their feathers…

This site uses Akismet to reduce spam. Learn how your comment data is processed.

The Sticks And Stones Community